The Web of Mystery and Fear of Spiders - Indiana State Museum

The Web of Mystery and Fear of Spiders 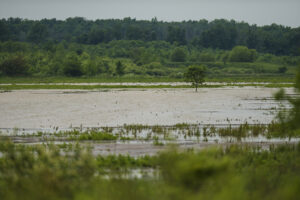 SPIDER!! The mention of the word is enough to evoke a primal fear response in many people. Few creatures are held in lower esteem than the spider. Many of us have had otherwise lovely walks in the Loblolly Marsh Nature Preserve at Limberlost State Historic Site rudely interrupted by a spider web becoming attached to our face. Or worse yet, the creature crawls into our hair and onto our neck. Unfortunately, most of these creatures met with an untimely, and usually quite violent, end. I like to call it the “Garfield response.” WHACK! SQUISH! And another spider’s life span has come to an end.

Far too seldom do we take a moment to appreciate the beauty and complexity of the spider.   There are more than 35,000 species of the class Arachnida (which includes spiders, ticks, mites, scorpions, harvestmen [daddy-long legs], etc.). In Indiana, there are more than 400 species of spiders but only two are dangerous – the Black Widow and the Brown Recluse. 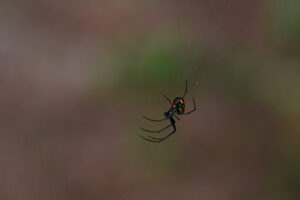 The Brown Recluse is a medium-sized spider with a fiddle-shaped design on its back. It is very reclusive (get it?), preferring to live in heavy cover such as lumber piles. It does have a bite that is likely to cause severe tissue damage in the area of the bite. However, a human fatality due to a Brown Recluse bite is extremely rare. Nevertheless, you should take precautions when working in an area that may be used as a home by the Brown Recluse.

The Black Widow spider, found mostly in southern Indiana and southern states, is another spider that can cause serious (sometimes fatal) health issues to a person who has been unlucky enough to be the recipient of her venom. (Yes, it is only the female Black Widow that poses a health threat to humans.) Of course, almost all spiders are able to inject venom, but the end result for humans is usually only minor irritation.

In perspective, worldwide the Black Widow and Brown Recluse together kill six people per year (mostly young children who do not get medical attention) whereas mosquito-borne diseases kill an estimated 3 million people per year! 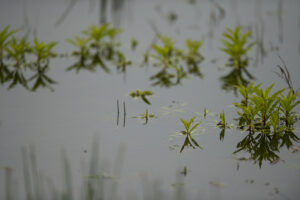 The next time someone says SPIDER, please don’t have the “Garfield Response” but rather take a few moments to see the beauty of the creature. Study the complexity of the web, be it

orb weaver, funnel spider, trapdoor spider or any of the hundreds of other spiders with which we share our habitat. Marvel at the maternal care needed to produce an egg sac that protects the developing young until they hatch. Wonder at the adaptation that allows the spiderlings to balloon away on the wind to establish a new home. Feel free to enjoy the Limberlost and Loblolly Marsh without undue fear of our eight-legged friends.

Register today for the Nov. 5 Marsh After Dark program (7 to 9 p.m.) where you can explore the Loblolly Marsh at night following a wildlife presentation. The night will close around the campfire.