Employees of the Indiana State Museum and Historic Sites don’t work solely within the confines of the museum’s locations. In fact, they often participate in fieldwork across the entire state of Indiana.

“The properties we steward for the public include some of the most important properties in our state – from the Levi Coffin House to Indiana’s first state capital,” Michele said. “But what the public doesn’t know is that we’re only seeing a portion of that site’s history. Some of that history is still hidden underground, and those resources need protecting.”

While museum employees have conducted a variety of archaeological digs throughout the years, they often work with universities and other community organizations to keep projects moving forward.

Unlike other excavations the museum’s team completes, such as a mastodon dig (link to Fred blog) that may take just a few weeks, an archaeological project is a constant process that may require years of monitoring.

“My favorite part is finding out or confirming new information from looking at the archaeological record,” Michele said. “For example, when working in 2015 at the property of the first state capitol building (in Corydon), we confirmed the location of the 1826 Clerk’s Office at the corner of the downtown square. That was never confirmed before.”

The Indiana State Museum has an extensive archaeological collection, featuring artifacts from important sites in Indiana. The Mann archaeological site in southwest Indiana is an example, and one of Michele’s favorite artifacts came from there. 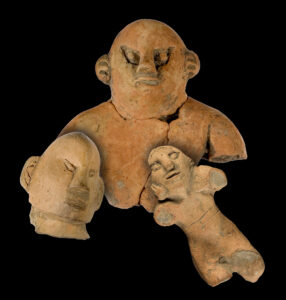 Clay figurines from around 1,700 years ago provide insight into what Pre-Columbian Native Americans looked like. These rare figurines showed clothing, jewelry, hairstyles and more.

“It’s an intimate connection to these people for me,” Michele said. “For someone who had a mother, father, who maybe had children…someone made that figurine, and you can see pieces of that person in the artifact. You’re automatically connected to this intimate representation of this person who had this complex life.”

These figurines are also rare for the time period, though the Mann archaeological site has hundreds of them.

“For this time period, there are far more here than any other archaeological site in North America,” Michele said.

Visitors will get a unique look at the museum’s archaeological collection when “First Nations: The Story of Indiana’s Founding People” reopens on March 24.

This reimagined gallery covers history that occurred 12,000 to around 300 years ago.

Visitors will learn how Pre-Columbian Native Americans developed successful, strong communities and will explore how they taught their children, how they governed, and about their thriving economies. Artifacts such as a Clovis point, a tool used around 10,000 years ago by Indiana’s first people, and some of the earliest ceramic pottery found in the state will be on display. “Not only will visitors be ‘wowed’ by some of the museum’s most beautiful Native American artifacts – such as gorgets and birdstones – that are in the collection, we will use these objects to help abandon common stereotypes that are often used in presenting Pre-Columbian Native American cultures,” Michele said.