When driving through downtown New Albany, Ind., visitors will find streets that are lined with beautiful historic homes, located right along the banks of the Ohio River. 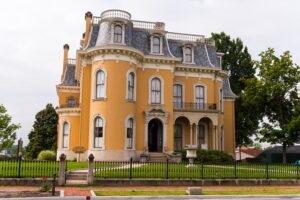 One of these homes near the end of Main Street is Culbertson Mansion – one of the 12 locations associated with the Indiana State Museum and Historic Sites.

The home, which began construction in 1867 and took two years to complete, is listed on the National Register of Historic Places.

The Culbertson Mansion State Historic Site is a masterpiece of Victorian artistry. It’s four stories tall and expands to more than 20,000 square feet of space, spread across 25 individual rooms.

Its hand-painted ceilings, carved staircase, marble fireplaces and elaborate plasterwork highlight just some of the beautiful features found in the home. It also included the latest technological advancements of the time, such as central heating and indoor plumbing. It cost $120,000 to build, or the equivalent of over $2.1 million today.

“I always call the Culbertson Mansion the most beautiful house in the land, and it’s not just because of its unrivaled aesthetic beauty,” said Jessica Stavros, southeast regional director for the Indiana State Museum and Historic Sites. “Every single time a guest walks through the front door, they are awestruck – either because of the intricately hand-painted ceilings and decorative arts or because they learn about the unbelievable impact one person can have in a community.”

The home was commissioned by New Albany businessman William S. Culbertson, and it was meant to be a wedding gift for his second wife Cornelia, who he married after his first wife passed away. 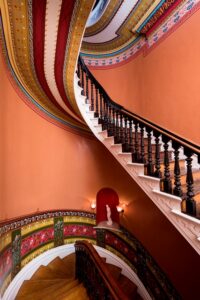 He made his initial fortune as a dry goods (fabric) wholesaler, and then invested in many capitalist ventures across the country during retirement. At the time of his death in 1892, he was considered to be the wealthiest man in Indiana.

With help from his friend and business partner John Jacob Astor III, he even provided over $600,000 in 1886 to build the Kentucky & Indiana Railroad Co. Bridge – New Albany’s first bridge.

Culbertson was also heavily involved in the community, serving as an elder at the local Presbyterian Church and founder of the New Albany chapter of the YMCA. He created the Culbertson Widow’s Home and the Cornelia Memorial Orphanage – organizations that he left $150,000 in endowments to in his will. Though they no longer exist, the money he left was redirected to local organizations that still aid the community today, including the children’s ward of the Floyd County Hospital and the Old Ladies Home Board, which awards HVAC improvements to elderly seniors in need.

When the home was first acquired by the State of Indiana in 1976, nearly all of the beautiful features were covered in a layer of coal soot as a result of the coal furnaces used to heat the home. That soot had to be painstakingly removed over decades in order to accurately restore the coloring, and that work continues today.

A long and fruitful public-private partnership has returned the house to its intended magnificence. Over the last 35 years, the Friends of Culbertson Mansion have raised over $1 million dollars toward the work, focusing on the interior spaces and extensive decorative features, while the state has funded restoration of the house’s exterior and structural elements.

Today, visitors touring Culbertson Mansion will see firsthand the tastes, ideals and lifestyles of people during the 1880s, and they will walk away with a better appreciation for the impact Culbertson had on New Albany. 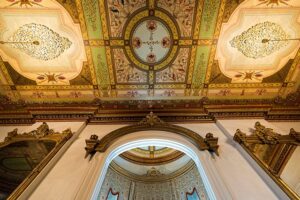 “Every third grader in Floyd County has visited the house for their spring field trip, and generations of families have created lasting memories within its walls,” said Jessica.

The site hosts a variety of events during the year, including a series of successful Clue-themed murder mystery dinners. In the fall, its Carriage House is transformed into “Literally, A Haunted House” – offering screams and spooky delight for visitors.

“People feel special here; they feel like they are part of something special,” said Jessica. “I consider it a great honor to share this extraordinary place with them. Once you’re here, this place is always with you.”

Culbertson Mansion State Historic Site is open from 9 a.m. to 5 p.m. Monday through Friday, and by appointment on the weekend.