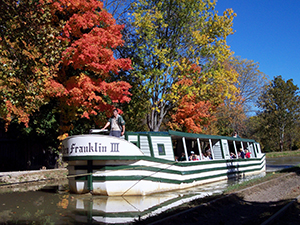 Use of Indiana’s Whitewater Canal for commercial transportation lasted less than 15 years in the 1800s, yet the early mode of transportation made an impact that continues today throughout the Whitewater Valley.

Whitewater Canal State Historic Site – which preserves a 14-mile section of the canal from Brookville to Laurel – gives visitors a glimpse of canal towns that grew and thrived along canal systems in the 1830s and 1840s. These towns became hubs of commerce in inland areas during Indiana’s early statehood and provided travelers on the canal a place to stay and find food. Canal towns also provided a place for draft animals who worked to tow the boats along the entire route to rest.

“The original idea was to get more commerce through Indiana,” said Jay Dishman, site manager of the Whitewater Canal State Historic Site.

Officials first began constructing hand-dug canals throughout the state after the passage of the Indiana Mammoth Internal Improvement Act of 1836. The Whitewater Canal – completed in 1847 – created a route from Lawrenceburg to Hagerstown, creating a 101-mile-long canal that transported dozens of canal boats daily filled with passengers and tons of cargo.

Visitors can relive the days of canal travel with a ride on the Ben Franklin III canal boat in Metamora. The 75-seat wood and fiberglass boat was put into service in 1990 and pays homage to the original Ben Franklin canal boat that traveled the canal thanks to the power of draft animals in the 1840s.

Passengers also get a one-of-a-kind experience that can only be found in Metamora: a horse-drawn canal boat journey through a covered wooden aqueduct.

“This is the most unique thing we have at the site,” Jay said of the aqueduct.

The 75-foot-long Duck Creek Aqueduct is indeed unique. It’s the only covered wooden bridge aqueduct left in the United States. Plus, the aqueduct contains original 1847 Burr arch trusses that visitors can admire while passing through the structure during their 20-minute journey on the canal.

“We have people come from far and wide to see the aqueduct,” Jay said.

Riding through the aqueduct isn’t the only thing visitors can experience from Indiana’s early canal days during a visit to the site.

The Metamora Grist Mill showcases one of the many mills built in Metamora and other canal towns after canals were replaced with a faster mode of transportation – the railroad. Mills used water power from the canal to mill flour, cotton, paper and more.

Visitors can see the original 1897 turbine used in the mill and experience how a mill built at the turn of the 20th century continues to produce corn meal today. Site visitors also get an up-close look at the mechanics used to power mill operations and see how a “flour dresser” is used to sift corn meal made at the mill.

Learn more about how early canal towns like Metamora helped to increase inland commerce in the 1830s during your next visit to the Whitewater Canal State Historic Site. Tours of the grist mill are free, and the mill is open from 10 a.m. to 5 p.m. Wednesday through Sunday.

Rides on the Ben Franklin III canal boat take place on the hour from noon to 4 p.m., Wednesday through Sunday, weather permitting. Tickets may be purchased at the canal boat office.

Remember, rides on the canal boat end for the season on Oct. 31, and the site closes to the public Dec. 1 through March 31, so schedule your trip soon! And, don’t forget to follow along with the Indiana State Museum and Historic Sites on Facebook, Twitter and Instagram during the month of September to learn more about Indiana’s early transportation and fun facts about the Whitewater Canal State Historic Site.