Indiana may have become a state in 1816, but its rich history dates back much further.

“If you want to get an idea of Indiana history, Vincennes is one of the first places people should see,” said David Weaver, site manager at Vincennes State Historic Sites. 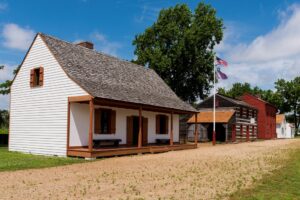 This historic site, one of the 12 locations associated with the Indiana State Museum and Historic Sites, tells the story of Indiana before it was even a state, going back to the time when we were only a territory.

Vincennes has a long history.  In 1730, the French established a military post in the area to protect the French fur trade in the region.  Two years later, Vincennes became a town.  In 1800, the Indiana Territory was established, and Vincennes was chosen as the capital.

“Vincennes was a natural choice given its size and where it was located,” David said.  He went on to explain that at the time, it was already a well-established town, and it was located in the middle of where the majority of the population was located.

“Here in Vincennes, we focus on the foundation for Indiana.  It’s the jumping off point,” David said.  “You learn how they wanted to build government and build a state.”

In 1805, Indiana held its first elections and elected two representatives to the newly-formed legistlature.  However, by 1813, the legislature decided to relocate the territorial capital to Corydon, which would become Indiana’s first state capital in 1816.

At Vincennes, visitors learn all about Indiana’s territorial history.  One of the highlights of the tour is the territorial capital building – a red, two-story building made of wood.  The territorial government rented the building for the 1811 session, and it is the only one of the buildings used for the legislature that has survived.  A legislative council used the top floor, while a house of representatives was on the first.

The building was originally constructed in another part of town, but it was dismantled and rebuilt here like a puzzle.

“People are in awe that it’s still around, because wooden buildings don’t typically last this long,” David said.  It has been restored to appear as it would have looked during the legislative meetings. 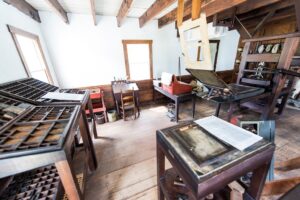 Visitors will also discover reproductions of the Jefferson Academy, the first school of higher education in Indiana, established by William Henry Harrison in 1801, and Elihu Stout’s Print Shop.  There, visitors learn about the importance of early printing and the sharing of information.

“With the legislature, they needed to be able to communicate with people,” David explained.  The print shop has an authentic 1807 printing press, and there visitors learn about Elihu Stout’s “Indiana Gazette” – the first newspaper in Indiana!

It was where Gov. William Henry Harrison assembled his army to march up the Wabash River in the Battle of Tippecanoe in 1811.  “This is where Zachary Taylor, who later became president, had one of his first commands,” David said, noting the site’s connection to two future heads of state.

Located in town, the Old State Bank was a part of the Second State Bank of Indiana system, which was established in the 1830s.  It was built in 1838 in Greek Revival Style, including large pillars and a portico in front.  Today, it’s used to host traveling exhibits, educational programs, and can even be rented for private events.

Finally, the French House, built in 1809, is one of the last examples of French Creole construction in Vincennes.  Its style, a type of timber-framed house with closely spaced vertical posts set on wooden sills, is typical of the homes that were built by French settlers to the area.

In addition to tours of these historic buildings, the site hosts a variety of special events throughout the year.  Local students participate in programs like a Heritage Fair and camps.  Public events include an upcoming Easter Egg Hunt, candlelight tours of the buildings and the popular Fort Fright, which returns in the fall.

Join us during March here on the blog, Facebook, Twitter and Instagram to learn more about the unique stories and history of Vincennes State Historic Sites.