In 1925, the year after Gene Stratton-Porter’s death, it was estimated that about 10 million copies of her books had been sold. Based on that number and an average thickness of the different books, it’s estimated that if every book sold could be stacked on top of each other, that pile would be 1.25 million feet tall! I found that number to be so large I couldn’t really grasp how high it was. So I divided it by 5,280, which is the number of feet in a mile, and came up with a stack of books that would be 236¾ miles to the top. Out of curiosity, I looked on the internet to see how high the International Space Station was orbiting the earth. On average, it orbits 230 miles above the surface of our planet. So if it really were possible to make a stack of all the books Gene had sold by the time of her death, the space station would have to be careful its orbit did not run into it.

Maybe a stack of books hundreds of miles high seems too outrageous to think about. Another way to explain how many books Gene sold has to do with time. Ten million copies sold would average out to over 1,600 books a day, every day, for 17 years. This would be over a book a minute being sold every minute of every day! 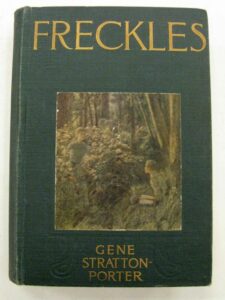 By any measure, Gene Stratton-Porter sold a lot of books. Gene was one of the best-selling authors of her time. In seven different years with six different books, she made the bestseller list. Her first bestseller was The Harvester, which was No. 5 in 1911 but No. 1 in 1912. Her second was Laddie, which hit No. 3 in 1913. Next was Michael O’Halloran, No. 3 in 1915. A Daughter of the Land was No. 9 in 1918. Her Father’s Daughter was number 8 in 1921. Gene’s last book that made the bestseller list did so after her death. That was Keeper of the Bees, which hit No. 3 in 1925.

Oddly enough, two of Gene’s books that have sold the greatest number of copies over the years never made the bestseller list. Freckles and A Girl of the Limberlost have each sold well over 2 million copies, but they have done so over many years.

That said, those books are bestsellers today – in the Limberlost State Historic Site gift shop.