The Indiana State Museum and Historic Sites’ historic copies of the Emancipation Proclamation and 13th Amendment – signed by President Abraham Lincoln to end slavery and free enslaved people – will be on display at the museum Jan. 13 to Feb. 13. It’s the first time the documents have been in public since before the pandemic.

“These two documents are so important to our country’s history,” Chief Curator and Research Officer Susannah Koerber said. “Unfortunately, they cannot be on display all of the time, but this year they will be on view to celebrate both the Dr. Martin Luther King Jr. holiday and Lincoln’s birthday.”

The documents are typically kept in storage because light exposure causes cumulative damage. They will be shown in special airtight cases with a fiber optic lighting system that keeps the light levels low while enabling visitors to read the documents. 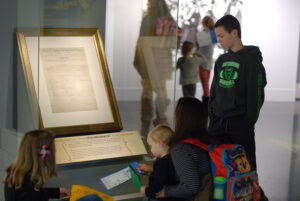 Admission to the museum is free on MLK Day, which typically is the most-attended day of the year. To learn more about the state museum’s copies of the Emancipation Proclamation and 13th Amendment, visit here.

In other Lincoln-related news: 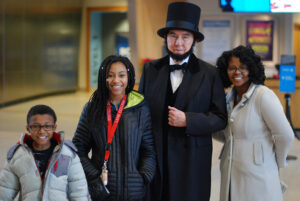 Need a new license plate for your vehicle? Consider the Lincoln’s Boyhood Home plate, proceeds from which benefit the state museum and its oversight of the Lincoln Financial Foundation Collection, one of the world’s largest collections of Lincoln artifacts.

The license plate was originally authorized in 2009 to benefit the Abraham Lincoln Bicentennial Commission for the bicentennial of Lincoln’s birthday. The commission transferred the plate to the state museum after it finished its work.

In the meantime, the Lincoln Financial Foundation Collection was awarded to a consortium led by Indiana State Museum and Historic Sites and the Allen County Public Library.

Proceeds from the license plate were designated to care for the collection.

“It helps us with the conservation, care and exhibition of the collection, which includes some spectacular objects, Koerber said. Recently conserved objects include Lincoln’s legal wallet and a cordial set—sometimes called a portable bar—the Lincolns used in the White House.

“When the cordial set came to us, there were some broken glasses,” Koerber said. “The pieces had been saved, so we were able to have the set professionally conserved. It now looks much as it did when the Lincolns used it to serve guests.”

Money from license plate also is used to maintain a website that allows visitors to search the more than 25,000 items in the collection.