Real Encounters with the Unexplained

Stories about sightings of ghosts, spirits and other beings become commonplace as Halloween approaches, but Indiana State Museum and Historic Sites staff know it doesn’t take the turn of a calendar for unexplained things to start happening.

To be clear, we’re not saying any of our locations are haunted. There are just some things that we haven’t been able to fully explain yet. Is it supernatural? Well, you’ll have to visit to decide for yourself. 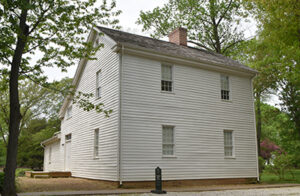 Several people have experience unexplained happenings in New Harmony buildings – like the Fauntleroy Home – for decades. Site manager Meagan Patterson said the first sighting of a ghostly figure in the home was reported in 1845.

Innocently enough, a woman who appeared to be wispy white was seen walking up the stairs. Over the years, multiple tour guides have reported being pushed down those same stairs when no one else is there.

Those aren’t the only things that have happened at the home that can’t be easily explained.

Neighbors have called to report lights being turned on at night in the second-floor rooms of the house. That’s a bit unusual, because there’s no electricity in the second story.

Then there’s instances of piano music late at night. There is a piano in the parlor of the Fauntleroy House, but no one has ever been found inside during further investigation into the late-night concerts. 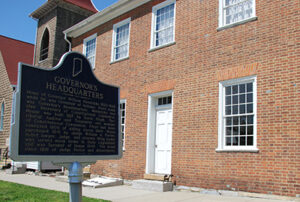 While preparing for an event several years ago, a volunteer attempted to enter the Hendricks House at Corydon Capitol with her daughter, but the young girl refused to enter the front door. The girl told her mother a “lady in the red dress” was standing at the top of the stairs, scaring her.

On another occasion, a group of Boy Scouts touring the home claimed to see the “lady in red” fly past the top of the kitchen stairs. That tour was cut a little short as the group of Boy Scouts promptly left the second floor, tumbling down the stairs as fast as they could.

Laura Spalding, Corydon Capitol’s program developer, said hearing footsteps in other parts of the home when no one is in that area happens frequently too – and it’s something she’s experienced herself. When she first began working at Corydon Capitol, she and a family member heard footsteps following them up the stairs, but no one else was there.

It’s not unusual for staff to hear footsteps early in the morning when there’s only one person in the building before the site opens for the day, either. 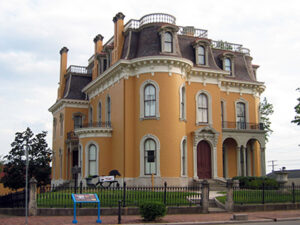 Culbertson Mansion is host to the longest running haunted house in southern Indiana – open since 1985 – but real paranormal happenings have been documented in a file since the 1970s.

First responders have reported seeing a woman in the house during alarms wearing a gray dress and white apron with a bow and her hair up in a bun. That matches the description of Mary Ann Hopkins, the head housekeeper who lived at the mansion for nearly 20 years before her death in 1884 at the age of 74.

Then there’s the mystery of the moving things. Dolls have mysteriously moved overnight to different floors of the mansion, and staff members are still searching for answers about how car keys can move themselves from the office space to the second-floor linen closet.

There are also items that won’t move.

Southeast regional director Jessica Stavros was attempting to move a chair a few years ago, but the piece of furniture simply wouldn’t budge. She checked to make sure the chair wasn’t caught on something and tried to move it again.

She eventually asked aloud if she could move the chair, and – just as if someone had been sitting on it all along – she was able to move the furniture to another location. 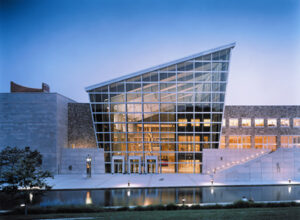 Unexplained happenings don’t just happen at locations with buildings constructed more than a century ago. Just ask the security team at the Indiana State Museum, which opened to visitors at its current location in 2002.

Borden Fleetwood usually works at night after the 270,000-square-foot building has closed to visitors for the day, and he admits senses are usually a little heightened after visitors leave and the lights have been dimmed.

That doesn’t explain the voices in the gallery on the first floor though. While patrolling the building on the third floor one night, he heard someone talking in the first-floor gallery. He couldn’t make out what was being said, and he didn’t find anyone when he went to look. Security cameras didn’t show anyone in that area when footage was reviewed.

That wasn’t just a one-time occurrence.

Every once in awhile, Borden still hears those voices coming from the first floor, but he’s never been able to track down exactly where they’re coming from. They always seem to be around the corner and just out of reach.