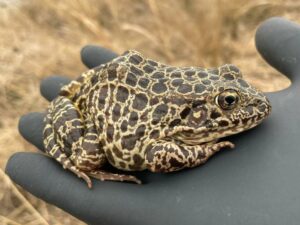 Angel Mounds State Historic Site in Evansville, Ind. is being considered as one of the locations the state Department of Natural Resources uses to repopulate the Indiana-endangered crawfish frog.

Repatriation of this once-common frog is at least two years away, but herpetologist Nate Engbrecht said that the 500-acre Angel Mounds site has high potential to serve as a recovery site.

“It appears to contain the right habitat features, including open grassy habitat and the original crawfish frog breeding pond,” he said.

Engbrecht and retired naturalist/herpetologist Mike Lodato toured Angel Mounds in early March with site manager Mike Linderman and over the next several months plan to visit several other sites located between Terre Haute and the Ohio River.

The crawfish frog (Lithobates areolatus) is a secretive, prairie-dwelling frog that reaches the eastern extent of its range in southeast Indiana. The frogs live in underground burrows created by terrestrial burrowing species of crayfish – thus the crawfish frog name. 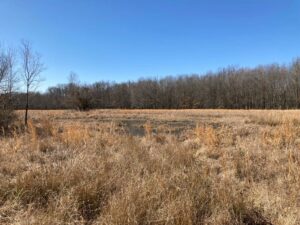 Large numbers of crawfish frogs are only known to be in two locations in Indiana currently – Big Oaks National Wildlife Refuge and the Hillenbrand Fish & Wildlife Area in Jasonville. The most suitable place for them at Angel Mounds is probably on the westernmost perimeter of the property, which gets saturated by rain in the late winter and is dry by August.

Lodato said he would like to see the crawfish frog return to Angel Mounds because “it’s part of the natural heritage of Indiana.”

DNR is in the initial stages of developing crawfish frog recovery strategies and is conducting a habitat suitability analysis to identify potential recovery sites in southwest Indiana, Engbrecht said. The project is funded by a conservation grant from the Indianapolis Zoological Society. 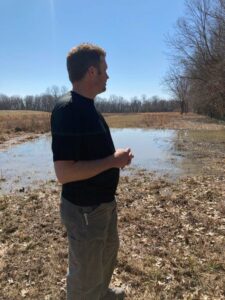 The next step will be to take a closer look at the habitat features at Angel Mounds, including:

-Monitoring the hydrology at the wetland to make sure there’s water available for the frogs to live – but not enough for fish, which would eat the tadpoles.

-Conducting searches to make sure there are underground burrows for the frogs to live in. The crawfish frog is large, clunky, nocturnal and an explosive breeder, Engbrecht said. “They’re not wandering around the landscape. They come to the ponds to breed and then go back to their burrows,” which are typically 300-600 meters from the pond.

-Sampling the amphibians currently living on site to make sure there are no predators or diseases that would endanger the frogs and to see if other species with similar biological patterns also use the wetlands.

If the right habitat features are confirmed to be present, the DNR will begin discussing strategies for relocating crawfish frogs to Angel Mounds.

“Indiana only has a couple of good populations of crawfish frogs left,” Engbrecht said. “This project is part of historic preservation. It’s part of what we’ve inherited that’s just barely hanging on. At this point, it’s like a restoration project.”

Angel Mounds State Historic Site is one of the best-preserved, pre-contact Native American sites in North America. Built between A.D. 1000 and 1450, the town was occupied by more than 1,000 people who were part of the Mississippian culture, and included earthen mounds built to elevate important buildings.