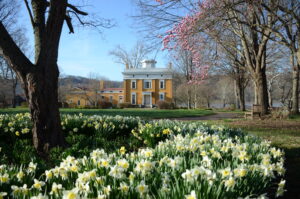 The birds are chirping, the leaves are starting to green up – it must be spring time!

Celebrate the earth’s reawakening with a beautiful day trip through rolling hills, limestone bluffs and dynamic foliage to a historic steamboat town in southeast Indiana. Stroll through 133 blocks of outstanding architecture, explore one of seven Indiana Arts and Culture Districts and pop into a few of 25+ local restaurants – all in the lovely town of Madison, Ind.

The ‘crown jewel of Madison’ is Lanier Mansion—an 1840s home right on the Ohio River known as one of the best examples of Greek Revival architecture in the country, and one location of the Indiana State Museum and Historic Sites. Tour through the mansion and hear the story of James Franklin Doughty Lanier. Imagine what your life might be like if you lived in such a grand home. Each room is restored to its original period style with furniture and objects Lanier and his family may have used.

Lanier’s legacy lives, amongst other notable achievements, through the loan he made to Indiana that kept the state participating in the Civil War. Governor Oliver P. Morton requested funds from Lanier to help outfit troops to fight for the north while keeping up on the state’s debt interest payments. Lanier made two unsecured loans totaling over $1 million — $26 million today — with no guarantee of repayment, but in 1870, these loans indeed were repaid with interest.

“The most intriguing part of the mansion is its story within Madison as a community,” said Jessica Stavros, southeastern regional manager of the Indiana State Museum and Historic Sites. “The mansion is such a focal point of the community because of where it sits on the river and the time it was built during the steamboat era.”

Lanier built the mansion on the banks of the Ohio River in 1844. At that time, rivers were a major highway system used for transportation of goods. The town’s location between the hubs of Cincinnati and Louisville allowed it to become a central point for transportation and industry.

“Tens of thousands of boats would have gone by and seen the mansion,” Jessica said.

Wealth and east coast settlers followed the waterfront factories that popped up, and the mix of cultures soon brought a mix of architectural styles. The town grew around the mansion. But as the railroad system grew and riverboats no longer were prime for mass transportation, the town’s growth stalled.

“The history of the mansion itself has been so well preserved, along with the rest of the Madison community,” Jessica said. “Everyone who lives there has serious pride and ownership of the town’s history.”

Today, the historic district contains numerous buildings reflecting nearly every period of the town’s development between 1817 and 1939. Federal style and Greek Revival mansions, shotgun houses, institutional and industrial buildings, and other two-and-three-story buildings can be viewed through guided or self-guided tours.

“Madison is the largest contiguous national historic district in the US, with 133 blocks,” said Sarah Prasil, director of marketing and advertising for Visit Madison Inc.

Along those 133 blocks are boutique shops, wineries, antique stores and an overall quaintness that landed the town on Country Living’s ‘top twenty Romantic towns in Indiana’ list.

Among additional recognitions, Madison also was one of eight finalists in the America’s Best Communities Competition in 2016, and in 2017 was selected as an official Indiana Cultural District and was awarded by the state of Indiana as a Stellar Community.

“The awards that the town gets are a reflection of the historic fabric of the buildings, which is anchored by the Lanier Mansion,” Jessica said.

As the weather warms up, Lanier’s front and back gardens will bloom, as will the foliage in the rest of southeast region of Indiana.

Just 100 miles from Indianapolis, a visit to Madison and its ‘crown jewel’ offers a beautiful drive and a relaxing, insightful weekend or day trip.

Join us throughout April here on the blog, Facebook, Twitter and Instagram to learn more about the fascinating history and unique stories behind the Lanier Mansion State Historic Site.