Thanksgiving: A tradition centuries in the making - Indiana State Museum

Thanksgiving: A tradition centuries in the making

On Thursday, millions of Americans will take time to celebrate and give thanks on the day known as Thanksgiving. But do you know where this tradition came from, or when the national holiday actually came to be? How about why everyone flocks to the store in search of a turkey for their holiday meal? Well, take a few minutes before the football games or plotting your Black Friday shopping strategy to learn some history and a few fun facts about the holiday. 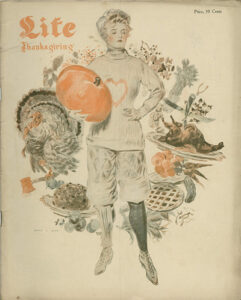 The first Thanksgiving at Plymouth

People have given thanks through food and feasts for a variety of reasons over several centuries, but one of the most famous feasts – now known as the “first” Thanksgiving in America – happened in 1621 with Pilgrims and the Wampanoag people. That three-day feast took place after the Pilgrims’ first corn harvest in the new world. It also served as a celebration of surviving the first year in New England since nearly half of the Pilgrims perished during the brutal winter.

Unlike Thanksgiving feasts of today – or even Thanksgivings of the early 1900s as highlighted in this LIFE magazine from our collection – the feast of the Pilgrims did not have pies, cakes or other desserts that are now a large part of the holiday meal, because the sugar supply had dwindled by the fall of 1621. The meal was more likely to have been made up of deer, which were presented to Pilgrims by the Native Americans, or fish and shellfish. Wild turkey might have been one of the dishes as they were plentiful in New England. 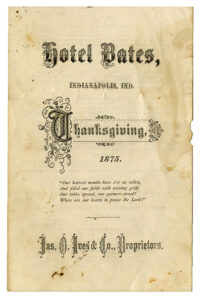 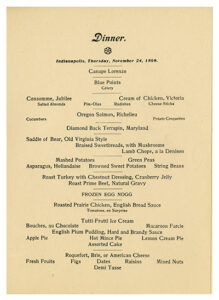 Turkeys haven’t always the main staple of the meal

One of the reasons the bird became a staple to the Thanksgiving meal near the turn of the 20th century was because of the number of turkeys in the United States. The birds are native to North America, like some other foods found on the Thanksgiving table, such as cranberries. Other foods – like potatoes and stuffing – became common after immigrants brought the food items and recipes to the United States.

This menu in our collection from the 1875 Thanksgiving meal at Hotel Bates in Indianapolis included pork, saddle of mutton, domestic duck, ribs of beef, ham, goose, chicken and veal, as well as entrees of baked quail pie, macaroni au gratin, welsh rarebit on toast, cutlets of venison and chicken pot pie. Turkey also is an option, but not the featured item. 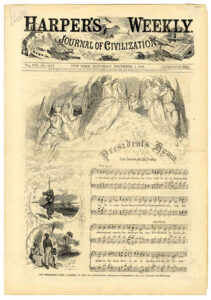 Days of thanksgiving became an occasional event in New England, and Continental Congress designated at least one day of thanksgiving each year. President George Washington issued the first Thanksgiving proclamation in 1789, and New York became the first state to adopt an annual Thanksgiving holiday in 1817. It wasn’t until 1863 – during the Civil War – that President Abraham Lincoln issued a proclamation calling on all Americans to ask God to “commend to his tender care all those who have become widows, orphans, mourners or sufferers in the lamentable civil strife” and “heal the wounds of the nation.”

This Dec. 5, 1863, edition of Harper’s Weekly magazine – part of the Lincoln Financial Foundation Collection at the Indiana State Museum – features the music and lyrics to the song “The President’s Hymn,” which was a musical version of Lincoln’s first Thanksgiving proclamation.

Happy Thanksgiving from our families to yours!