To the moon: Celebrating “one giant leap for mankind” during Apollo 11’s 50th anniversary

To the moon: Celebrating “one giant leap for mankind” during Apollo 11’s 50th anniversary

Fifty years ago, two American astronauts made history when they safely landed on the surface of the moon.

Apollo 11 astronauts Neil Armstrong and Buzz Aldrin touched down on the moon on July 20, 1969, after launching into space just a few days prior. Armstrong, a Purdue University graduate, commanded the mission and was the first man to set foot on the moon – but there are more Hoosier ties to the moon landing than Armstrong’s education.

Learn about these Indiana connections and celebrate this historic occasion during Family Discovery Day at the Indiana State Museum on Saturday, and see a special installation at the museum through Aug. 18.

Before your visit, learn a few fun facts about the Apollo 11 mission through the stories behind the items on display or within the Indiana State Museum and Historic Sites collection! 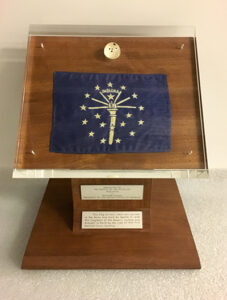 Armstrong and Aldrin did more than just land the Eagle on the moon’s surface and take “one small step for man, one giant leap for mankind” 50 years ago. They also took photos to document the moon’s surface, conducted experiments and collected lunar samples during their 22 hours on the moon.

Once the astronauts returned to Earth, President Richard Nixon asked NASA to create displays containing lunar surface material and the flags of 135 nations, U.S. states and territories. The display with the Indiana flag and 0.05 grams of Apollo 11 moon dust was presented to Gov. Edgar D. Whitcomb.

It is now part of the collection at the Indiana State Museum and Historic Sites. 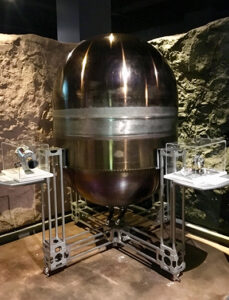 Visitors to the Indiana State Museum can see one of these tanks up close through Aug. 18 thanks to the Rolls-Royce Heritage Trust. 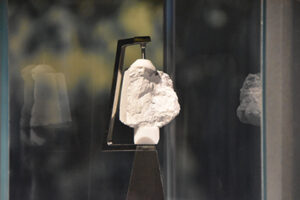 Although Neil Armstrong and Buzz Aldrin were the first Americans to land on the moon, they weren’t the last. Apollo missions continued until December 1972 with a total of 12 Americans walking on the moon.

Each mission documented their time on the moon through photos and collected lunar samples. Apollo 16 – the second-to-last Apollo mission – collected nearly 211 pounds of lunar material, including Lunar Sample 60025. A smaller piece of the moon rock is on display within the Birth of the Earth gallery at the Indiana State Museum thanks to NASA.

Celebrate the Apollo 11 anniversary with activities and programs at the Indiana State Museum and Historic Sites throughout July. Learn more here: http://bit.ly/2GfMFzy