Ashley Leary remembers the first time she realized cycling had something profound to offer her. She was living in Boston and using mass transit to get around. One day she saw a couple of cyclists moving through traffic, shooting past cars and thought, “‘Oh, dang — I want to do that! I want to be able to get up and go. I don’t want to wait for the bus. I don’t want to wait for the train.’” 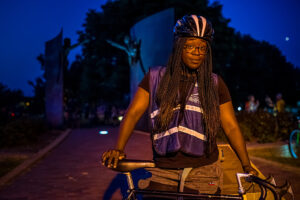 While the bike became a means to an end — a way for her to move from one point to the other — it didn’t take long for her to realize that cycling was becoming much more than transportation. “Riding across Boston and going head to head with drivers there really opened up the ways I began to think of myself,” she said. “I was claiming my space. When you ride in traffic, you have to be the car. You have to think further ahead than the drivers around you. I began to see things differently, to understand my relationship to the city and place differently.”

Darting in and out of traffic, reading the city blocks one at a time, and directly challenging limitations began to change her philosophy and outlook on life. “The more I rode, the more I thought about the importance of riding and what it provided for me,” she said. “Riding is great for my physical health, for sure. But it also allowed me to go into a positive mental space and think about what was important in life and how I spent my time.

“I never imagined that I would become a cyclist or that I would identify as a ‘cyclist,’ and I’m always amazed about what it’s done for me. Another reason why I started cycling was for health reasons. I had high blood pressure at a young age because of my family history. And then I started cycling. Then, next, that made me want to change my eating habits. And then, next, that allowed me to take control of my blood pressure, and soon I didn’t need medication anymore. That’s kind of a big deal.”

Soon, biking had become a way of living. Through common maintenance and repairs, she discovered she had an aptitude for mechanics and spatial awareness. Riding her bike led to discovering her talents in fixing and maintaining her bike. This discovery led her to seek out others who had made cycling a central part of their lives, which brought her to Bikes Not Bombs. This advocacy group fosters peacebuilding and conflict resolution strategies through cycling and bicycle education. 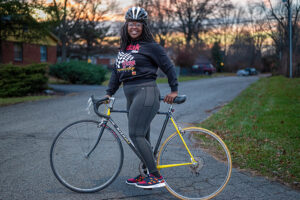 “I learned so much because of Bikes Not Bombs and its commitment to service and change. Sure, I learned mechanics and how to fix things with my hands and self-reliance. But I also learned about other cultures. I learned about my rights, how to become a leader, to respect differences, and that it’s OK to fight for the world we want to see.”

Leary immersed herself in the Boston cycling scene and traveled the world through her involvement in Bikes Not Bombs. She now finds herself as a resident of Indianapolis at a time when the city is still figuring out what kind of cycling culture it wants to foster and support. “Certain parts of Indianapolis are very bike-friendly,” she said, “but many areas in the city are overlooked and closed off to cyclists concerned about their safety or the safety of their families.”

As a young mother, safety is a sentiment Leary can relate to. She finds that more of her riding choices today are focused less on speed and more on the use of cycling to foster a sense of wonder in her son. Still, she encourages Indy to keep moving forward in pushing toward a bike-friendly city for all residents of all ages. “We need more earn-a-bike programs and more youth-oriented programs that integrate bike riding and maintenance in their programming,” she urged. 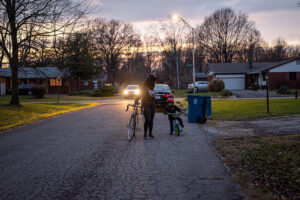 Another suggestion: “The city has a lot of alleyways, many of them underutilized or in need of repair. What if we started building bike paths and routes through some of the alleys?” The use of alleys as bike paths or races is common in cities with a strong bike messenger culture. The informal conversion of alleys into bike thoroughfares, called alley cats or alleycat races, is another example of how cycling culture reimagines often overlooked pockets of urban environments. “The alleys here are so amazing. You could do a lot of cool alley cats, and that would help grow the culture here.”

For Leary, representation matters, and she wants others to know that biking is an option for them as well. “I’m a Black female on a bike, and I heard about that a lot, especially back in Boston. I would hear things like, ‘Oh, you’re the only Black girl in the hood with lights on your bike,’ or, ‘You’re wearing a helmet?’ And I’d think, ‘Yeah, I am. That’s my culture. I grew up in safety. That’s how I was taught. I’m proud of that, and I want others to try it out.’”

“People would always tell me,” she continued, “that biking is dangerous. That it’s too far, too hard, too this or that, too impossible.”