“When I ride, I see things again for the first time.” 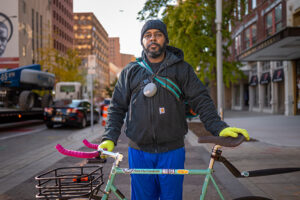 By the time you realize he’s passed you, Clarence is already a block or two ahead. It doesn’t matter if you are sitting at a stoplight, waiting for the light to change, or driving along in downtown traffic. Clarence Jones will almost certainly get to where he’s going on a bike faster than you could with your car, at least when downtown. Compared to his skill and trigger-like reaction on his brakeless, single-speed bicycle, automobiles may feel more like bison slowly lumbering about on narrowed, congested streets.

And it’s not just cars he can typically outperform. It’s the other delivery riders, who generally are half his age.

“I will wipe them out the water,” Clarence says.

Despite starting his career as a bike deliveryman at the age of 35, Clarence, accustomed to a life of constant movement and hustle to make ends meet, refused to slow down. “I came in, and people were like, ‘Man, this old man? How’s he gonna hang with us?’” said Jones, now 40. “These were teenagers and guys in their early 20s who looked at me and were all, ‘He is not gonna hang with us, man, no way.’” 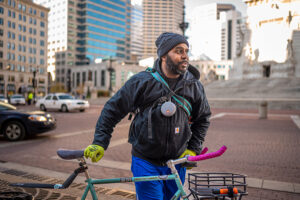 “I would clean the table with them. I mean, of course, I had my bad days, but for the most part, it was just… it was just kind of easy to do.” Soon, the other cyclists accepted Clarence. Revered him, actually, and looked to him for inspiration. “There’s an alliance there and a bond created. So I feel like I have a duty to them, to be there whenever something happens to them. But also a duty to myself and the lifestyle I’ve chosen.”

And while it is undoubtedly true that Jones has a gift for speed (if you see him passing you by, you’ll see him zoom by at speeds between 30-40 mph), what takes his gift to the level is his talent of geographical awareness. “I’ve always liked maps, and I get into geography, and I’ll study a place and the maps. And once I’ve studied a place, I can get anywhere at any given time because I’ve studied to know.”

Like a master chess player, 10 moves ahead of his opponent, Clarence understands how urban spaces fit together and predicts how these dynamic, fluid spaces ebb and flow. “I look at least two or three blocks ahead all the time.” This spatial awareness is part of why he ditched the brakes. He now cycles using brake straps, slowing down using the movement of his legs to stop or reverse the direction of the back wheel.

Although bike rides with his father helped instill an imagination of movement, Clarence was, like many, reliant upon an automobile as his primary mode of transportation for most of his early adult life. It wasn’t until a series of setbacks that he was forced to adopt the bike as his dominant mode of moving from one place to another. 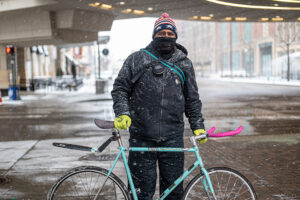 First, a medical scare landed him in the hospital for a few days. Personal economic devastation soon followed his medical recovery. Bills piled up. Rent went unpaid. Soon, Clarence was without a home and eventually found himself in the ranks of the hundreds of thousands of Americans who work full time yet are shelter deprived.

Clarence was employed as a janitor for Eli Lilly, hired through a subcontractor while sleeping across the street at City Market. “I would lock my bike up to me,” Jones said when looking back on this moment in his life. “I would lock it up to me, and I would sleep on a park bench over at the Farmer’s Market. Then I would get up early in the morning, 4:30 am, ’cause I would have to be there at 6 a.m., so I would get there early to take a shower. Nobody suspected a thing. I had lockers and all my clothes in the locker, and I would take ’em in big trash bags. And I would put all this stuff in my bag, and I would go to the laundromat, but didn’t nobody know any of that stuff.” 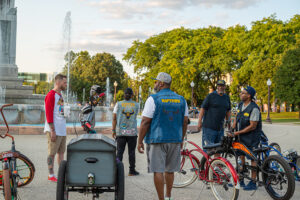 Jones now sees himself as an activist who lives out his activism through his daily life. His attention has turned toward the intersection of transportation, access and equality. He hopes to apply his work ethic and sense of spatial intellect to encourage more people to imagine and then commit to a lifestyle by relying on cycling as their primary means of transportation. To Clarence, ditching the car and grabbing the bike is, in essence, an act of personal and social revolution. 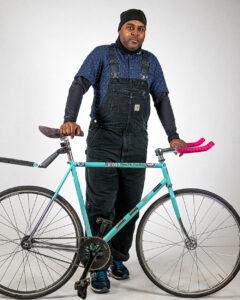 “The streets are just as much ours, maybe more. Sometimes, I’ve got to be the car. That’s how I move around, and when I first realized that, that was powerful. More people need to understand that. We’ve got to get people to understand that we matter. We aren’t invisible.”