“The city is my soundtrack.” 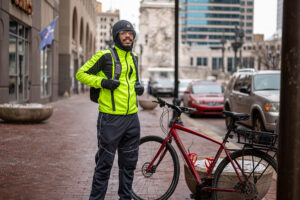 Evan Cole leaned his bike against the wall and began to peel off layers of clothing. His gloves came off first. Then, his outer coat. The balaclava next. It was winter, but that hadn’t deterred Evan from riding his bike. “It doesn’t matter the season. I’m riding my bike. I may wait out heavy snows or storms, but if I’m going anywhere, I’m getting there on my bike.”

Cole agreed to talk about his relationship with cycling and why biking has been his preferred means of transportation since he was an adolescent. As it turned out, this is a conversation he is eager to have.

“I woke up, checked my phone. It was about 11 degrees, so I got geared up with multiple layers. But the ride here wasn’t too bad,” he said. 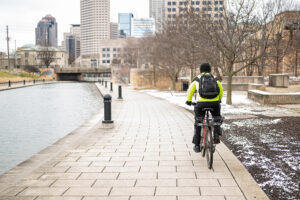 Cole is the kind of bike rider who everyone sees, who everyone knows, especially if you live in or frequent downtown Indianapolis. He’s riding across the mile square streets and trails daily, using his bike to run errands and get to and from work. Like many other daily riders, he is part of the background of the urban landscape. And yet — when it comes to policy conversations about bicycles — he’s also the kind of rider most likely to be overlooked. Cyclists like Cole seem to stay invisible when discussions take place about the ways to encourage and increase the use of bikes.

Why? For starters, Cole never bought into what many view as an American rite of passage: the car. He’s never bothered to obtain a driver’s license.

“I’ve been riding around the city of Indianapolis for over 10 years,” he said. “It’s my main mode of transportation. I started riding in high school when I lived on the eastside near Washington Square Mall. When it came time for me to go through the process of getting a license, I decided I didn’t want to do that. I just kept riding. I thought, ‘You know, I could just skip the whole car thing.’ So yeah, that’s what I did. Later, I had a partner who encouraged me to get a license. I came close to considering it, but ultimately a bigger part of me determined, nah, I can’t do that.”

Most policy conversations surrounding bikes in the United States, particularly those in the Midwest, assume the dominance and reliance upon an automobile. Urban planners and politicians tend to think that most cyclists will still rely predominantly on their cars –  even in Indy, a place known for its beloved and expanding trail system.

“I got to this place where I figured out I don’t need to really get a license unless I need to travel long distances where the bus isn’t able to take me. As long as I’m able to live close to where I need to go, I’m fine,” he said. “I’m trying to accomplish more with my life, and a car is just way on the back burner. I just think that we don’t need all of that. With my personality, this just works better for me.” 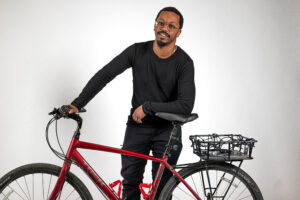 While this concept may seem foreign to some, Cole’s is an idea that others are embracing. Recent studies show that his perspective is becoming more common among younger generations. They are suspicious of cars and of environments built primarily for cars. Instead, they want to live in cities designed for people.

“Riding does so much for me,” he explained. “I think at this point, my bike is connected to my mental health. I feel better when riding, I feel better after riding, and I like the fact I’m using my bike to get to my jobs and just be proactive. Sure, there are bad days. There are occasionally days where it’s just like, ‘All right, I’m really not feeling this ride today.’ But then I’ll do it anyway, and I feel so much better after doing it. When I’m biking, I’m like, ‘OK. Yeah, yeah, this is fine. This is great. I feel great.’”

Beyond the mental health benefits, cycling is an excellent way for Cole to remain connected to his friends and his city. “There’s the aspect of meeting up with my friends to ride. I normally ride by myself, but sometimes, when I can get out when it’s a nice day, I’ll connect with some of the bike messengers. I like hanging out on the Circle or downtown, and we’ll meet up and hang out for a couple hours. Sometimes we’ll go on group rides, and sometimes we’ll go our separate ways. 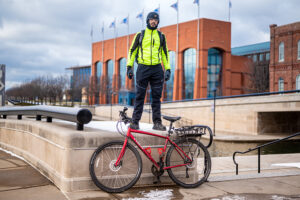 “Riding has become a lot more fun, and it’s a way for me to feel like I’m an explorer in my city. It’s become less like I’m just trying to get to point A to point B,” he explained. “Now, there are times when I ride to other parts of the city just to make it a point to revisit places. ‘Oh, I haven’t been to Garfield Park in a while. Let’s ride around down there.’ Or, ‘I haven’t been out east in a long time.’ So I’ll like hop on my bike, take the trails that pass through Irvington and just go until I decide to stop.

“I think I got hooked when I was a kid,” he said, smiling, as he related his mobility origin story. “My dad tried to get me to ride bikes at a young age, and I just kind of stuck with it for a while. It felt fresh. I was alert. Yeah, I got a lot of scrapes and crashed a few times. I remember going down a hill — that was really fun, I was so excited! I’m catching all that speed. And then, I just lost control and crashed. It hurt like hell.”

“But I was also just like —THAT—WAS—AWESOME! For the first time, I felt fast. I could feel excitement inside me. I enjoyed feeling like that, and I try to keep that feeling going now when I can. Like, when I catch myself in a groove, and I catch like five or six lights in a row. That’s a streamlined feeling. And, yeah, it’s pretty great.”