“If you are present when you need to be present, whatever you do becomes spiritual. Things begin to have a certain weight to them.” 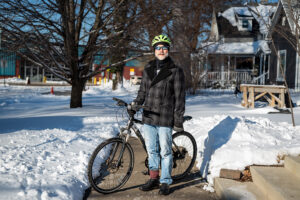 Most who know Nick Gehlhausen likely have memories of meeting him for the first time while he was on his bike or walking alongside it. The longtime resident of Springdale, on the city’s near eastside, has been biking as a primary form of transportation for over 18 years. “I really like the city,” he said. “Then I moved away for a while and liked it even more when I came back.”

Gehlhausen started biking as a form of exercise, commuting to a contract job on the north side of town. “But then I changed jobs and started riding even more.”

In some ways, his story is a common one among riders who find themselves moving through the city, day after day, on two wheels. Daily and regular riders become students of human behavior, witnessing frequent moments when traffic brings out the worst in people. Nick has observed firsthand some of the ways being in a car seems to chip away at a person’s sense of responsibility to others. Cars would pass too close, causing him to veer off the road. Sometimes, they hit him. People would yell. Worse, drivers would not see him as they turned or slowly rolled through an intersection, resulting in numerous collisions.

“Soon, I discovered that I was one of those riders who fought for his right to be on the road,” he said. “This was before the trail system. I’ve had people yell at me to get on the sidewalk, to get out of the way, demanding to know, ‘What are you doing?’ I got thick skin out of that.”

Gehlhausen quickly became active in what he referred to as the “bike movement,” which included advocacy for legislation and efforts to change the culture of transportation in Indianapolis.

“The first time I was hit, I remember going up the driver’s hood. I was lying there on her hood while the car was still moving, looking right at her. I feel like we were both thinking the same thing, ‘Did that really just happen?!?’”

But despite the aggravation from drivers and threats from automobiles, Gehlhausen is determined to keep cycling and to keep being that change he wants to see in the world. “Riding my bike has allowed me an opportunity to become more aware of myself and my surroundings. I’m more philosophical about things. Riding helps me focus my thinking. It gives me an opportunity to be present in the moment, to notice the journey, and to take stock in what’s happening around me as it’s happening.”

Cars, he argued, don’t do any of that. 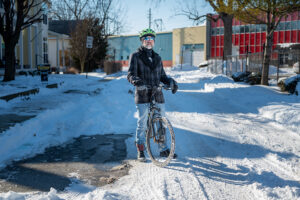 “When you are driving, you are destination-focused,” he said. “You miss everything between the start and the end of the trip. When I’m on my bike, I’m very aware of what’s happening all around me. Cars close us off from our surroundings, from all of these small moments in our lives. I think the emphasis on the car dehumanizes people.”

Riding is a way of reclaiming his humanity, as well as a way for him to demonstrate to others that they can do the same. “Everyone’s circumstances are different. But for those who are able, I want them to know that they are missing out on something important each time they decide not to ride a bike. Riding has taught me so much. It’s provided me with a new philosophical outlook. That’s an important part of living for me, and I want everyone to know what that’s like.” 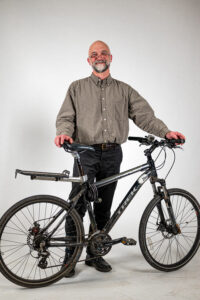 But still, many parts of the world, Indianapolis included, have been arranged to encourage reliance on cars. Like many bike advocates, Nick knows that supporting and encouraging a shift away from cars and toward bikes is bound to be a slow, uphill climb. However, it’s a fight Nick welcomes.

“When traffic engineers determine the speed limit of residential streets, they know that for every 5 mph faster we make the streets, more people are statistically more likely to be struck and killed by cars,” Nick said. “As a society, we’ve determined that we are OK sacrificing a certain number of lives to drive our cars. At some point, I woke up and said, ‘I’m not OK with that,’ and I want others to not be OK with that too.

“When I’m riding,” he added, “I’m also trying to show people, ‘Hey, this is viable. You can do this too.’ Sometimes, when I’m riding, I feel myself going someplace mentally. It feels virtuous, and I want others to feel that way too.”