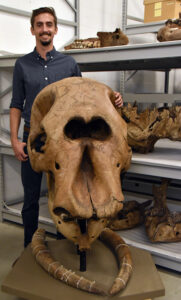 Tommy Anderson remembers exactly when his interest in Ice Age animals began – at age 5 after his uncle found the leg bone of a mastodon.

He remembers having an interest in dinosaurs, but seeing the bones of an American mastodon and its skull excavated from his uncle’s pond near Monticello left a long-lasting impression on the youngster.

Tommy, who is now 21, still remembers the two weeks when a team from the Indiana State Museum and Historic Sites set up the dig site and uncovered the bones of an Ice Age giant that had been under the Indiana dirt for thousands of years.

But there’s one afternoon that stands out in his memory more than others: the evening the team found the intact mastodon skull.

“It was eerie,” he said, noting the hollow space of the nostrils first reminded him of a cyclops instead of a distant relative of the modern elephant. “I remember wondering how they were going to get the skull out.”

Indiana State Museum and Historic Sites Senior Research Curator of Paleobiology Ron Richards was on the dig in 2002. He said the team uncovered the rare find during the late afternoon on the very last day of the first week. The team didn’t expect to find the intact skull, and they used car headlights and lanterns to illuminate the workspace throughout the evening.

“We don’t usually dig after dark,” Ron said. “Once we found it, we couldn’t stop though.”

Tommy doesn’t remember how long he stood watching the hours of work that afternoon, but he never forgot the excitement of the excavation.

He created a book to commemorate the dig, was quick to share about the adventure with his Kindergarten class and used the dig as an “interesting fact” for years during icebreaker games on the first day of school. Tommy also journeyed to the Indiana State Museum several times throughout the years to see the preservation process of the skull and to see the skull on display.

“I’ve seen it off and on for the past 16 years,” he said. “Each time, I just see more intricacies with it.”

His continued interest in the mastodon bones and in paleontology over the years led him to another unique experience in August – volunteering during the museum’s annual dig at Megenity Cave.

Tommy, now 16 years older since the dig on his uncle’s property, was able to play a larger role in the dig and understand more this time than he did before.

During half of the day, Tommy spent time inside Megenity Cave learning about the project and transporting buckets to the screening area outside. He spent the other half of the day helping to screen the buckets of dirt brought out from inside the cave.

Although there were some major differences in this dig – the team at Megenity Cave wasn’t looking for mastodon bones this time – there were some similarities. Team members were still searching for evidence of Ice Age animals, just much smaller ones. This most recent dig also provided another brand-new experience for Tommy.

And, just like the dig in 2002, Tommy couldn’t wait to see what they would uncover.