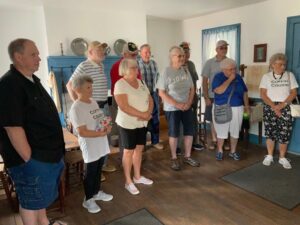 After years of trying, Janice Arbaugh finally convinced her cousins to take a trip to Fountain City to experience a part of their heritage: the Levi and Catharine Coffin State Historic Site.

Arbaugh and her relatives – 13 in all, most of them first cousins and the great-grandchildren of John Coffin, who was a great-grandson of Bethuel Coffin, uncle to Levi Coffin – spent Wednesday, Aug. 11, touring the house and the interpretive center to learn more about their famous ancestor and the home that became known as “The Grand Central Station of the Underground Railroad.”

“It’s emotional for me,” said Arbaugh, who wore a shirt that said, “Proud to Be Coffin.” “It’s hard to comprehend how he risked everything for what he believed in and acted upon his belief – not just talked about it. It’s an amazing story in our history – and the history of our country. And then you add our family connection to that.”

Arbaugh, who lives about 45 miles west of Boise, Idaho, said she got some of the cousins to visit the historic site by flying from Boise to Des Moines, Iowa, renting a van, picking them up and driving them to Indiana. Other cousins made the trip from Michigan and North Carolina for the first family reunion in several decades. 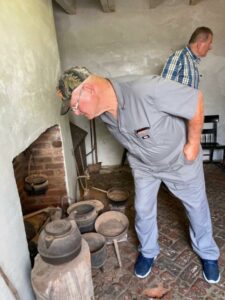 Only Arbaugh and one other cousin had visited the house before. For them, the experience provided a deeper appreciation and immense pride for their family history.

Bob Waugh, one of the Iowa cousins, marveled at Levi and Catharine Coffin’s willingness to risk their lives to help more than 1,000 freedom-seekers escape slavery from 1826-1847.

“It’s just amazing,” he said. “I understand the conditions and the way they lived back in those days, but realizing the situation he was putting himself and his family in, it’s just amazing what they did.”

The Coffin descendants were lucky too – their guide, Janice McGuire, has been giving tours of the house since 1977. (Her sister Saundra Jackson, who also was along on the tour, also has been a volunteer tour guide at the site for nearly 45 years.)

“That lady does an outstanding job of portraying it,” Arbaugh said. “She really does.”

Arbaugh traces her family lineage for 14 generations over 412 years. The oldest are Tristam and Dionis Coffin, who came to America from England and once owned Nantucket Island off the coast of Massachusetts. The youngest is Everett Overton, her great-grandson, who was born two weeks ago.

“The community of Fountain City is outstanding and needs to be commended for all they did to preserve this house,” she said. “They cared enough to preserve that building so that someday, that little boy who was born two weeks ago will know this story.”