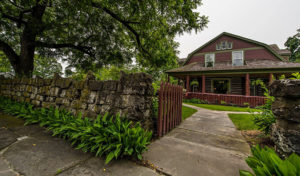 The swampy wetlands of Limberlost might not be where most authors would choose to live and work, but it was the ideal place for Gene Stratton-Porter to begin her career as a best-selling author.

Then again, Gene wasn’t just an author. She was also a naturalist, illustrator, photographer and woman who was indeed ahead of her time. Although her husband owned a drug store in Geneva and later co-founded the Bank of Geneva, Gene pursued a writing career as a way to make her own money at a time when most married women were homemakers.

While other women completed household chores of sewing and cooking, Gene often spent her days exploring the diverse wetlands around her home with the camera her daughter gave her as a Christmas present and a gun – just in case she might need to defend herself from snakes.

At the Limberlost Swamp, Gene found a readily available laboratory and inspiration for her early nature articles and novels – even though she once described the area as a “treacherous swamp and quagmire, filled with every plant, animal and human danger known.” It’s also a location where fans of Gene’s work and naturalists continue to visit today.

Visitors can quite literally step into Gene’s world during their visit to Limberlost State Historic Site. It was here that she lived for 18 years, writing six novels and five nature books.

Begin your visit to Gene’s former home by sitting on the front porch of the cabin that she designed after her family moved to the area in 1888. Admire the original cedar log construction of the cabin, which was completed in 1895, and imagine her view of downtown Geneva before venturing inside the home.

There, you can explore Gene’s library filled with books, collections and her own illustrations, as well as photographs she took herself while living there. The home also features a living room that includes Gene’s paint box and easel – necessities for any illustrator.

Other spaces in the cabin highlight Gene’s interests, such as her very first darkroom used for developing film and a conservatory filled with plants. Large porches and original windows in the home also provide unique opportunities to interact with the world outside.

There are rooms of her home that she used for inspiration in her books too.

“She literally wrote herself into the books,” said Curt Burnette, Limberlost State Historic Site program developer and interpretive naturalist, noting the “Bird Woman” in Freckles and The Girl of the Limberlost – two of her best-selling novels – shares characteristics with Gene and lives in a home very similar to Gene’s cabin.

For example, the Bird Woman is “staggering under a load of cameras and paraphernalia” in the swamp when the main character meets her in Freckles. Gene eventually owned several cameras and other photography equipment, and she often explored the swamp around her home by herself with those items.

Although a visit today to Limberlost Swamp doesn’t look exactly as it did while Gene and her family lived there, you can still explore the restored wetlands around town and find inspiration in the natural beauty of the area just as Gene did years ago.

Tours at Limberlost State Historic Site are available on demand Tuesdays through Sundays from 10 a.m. to 5 p.m., with the last tour beginning at 4 p.m. Please contact the site at (260) 368-7428 to schedule naturalist tours of the Limberlost Swamp.

Follow the Indiana State Museum and Historic Sites on Facebook, Twitter and Instagram during the month of August to learn more stories and fun facts about Gene’s life and Limberlost State Historic Site – and schedule a trip of your own to the Limberlost soon!