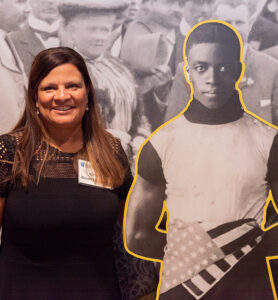 Karen Brown Donovan, the great-granddaughter of champion cyclist Marshall “Major” Taylor, glanced around the Indiana State Museum exhibit devoted to her great-grandfather and speculated that despite the racism and hatred that drove him from Indianapolis in 1895, he would have appreciated the acclaim he’s receiving now.

“I don’t think the average person could forget that kind of treatment, that kind of hate,” she said. “But from what I know of him, he had a remarkable ability to set that aside and focus on what he really wanted. He might say something like ‘finally – finally – I’m having my day.’”

Donovan never knew her great-grandfather, who died in 1932, but she was close to her grandmother, Sydney Taylor Brown, who was Taylor’s only child. So she’d already seen some of the artifacts in “Major Taylor: Fastest Cyclist in the World” in her grandmother’s house long before Sydney donated them to the Indiana State Museum.

But in looking through the exhibit, Donovan was moved to read portions of the heartfelt letters Major wrote to Sydney while he was racing in Europe. She choked up thinking about what her grandmother would have thought.

Donovan said she was initially aware of Major Taylor because her late father, Army Gen. Dallas Coverdale Brown Jr. – Sydney’s son – had Taylor’s autobiography, “The Fastest Bicycle Rider in the World,” on his bookshelf among his history books and biographies of military leaders. He would point to it, she said, and say, “That book is about my grandfather.”

“So I learned about Major very organically growing up,” Donovan said. 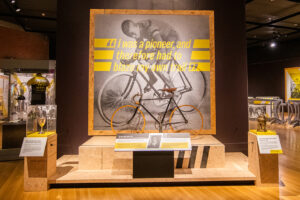 Her fascination with Major’s story set in when she was about 9 years old, when her grandmother came to take care of her and her four siblings for about 10 days when her parents were traveling in Europe. Her grandmother Sydney “was one of the most fascinating people I’ve met in my entire life – and I’ve met a lot of people. Her stories were beautifully told and full of detail. It was like reading a book.”

Donovan was in college when her grandmother decided to donate her father’s artifacts. Sydney offered parts of the collection to Donovan and her older brother, but they declined because they didn’t have a safe place to keep the items, “and I knew that much of what she had was museum quality. I think she made a great call” donating the collection to the Indiana State Museum.

After college, Donovan, who lives in Hawaii with her husband, a retired Navy captain, worked on and off in government, taught school and raised two sons. Her job now is managing the legacy of her great-grandfather by supporting events that honor him – like “Major Taylor: Fastest Cyclist in the World.” 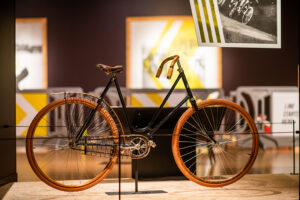 She said she wants visitors “to remember that there was a man named Major Taylor, who started out as Marshall Taylor, who was like any other child of his era when luck found him. Luck took him to the home of wealthy people. Luck let him live with those people and be educated with them. They gave him his first bicycle. His story could have been anyone’s story. And then you throw in his extraordinary athletic talent and you have all the makings of a great American novel, or a film.”

Donovan said that in her home growing up, it was her father’s career – not Major Taylor’s – that was always the big deal.

“But the story of Major Taylor was always there,” she said, “and I always wondered why everybody didn’t know about it. I don’t have to worry about that anymore.”