Just 90 minutes east of Indianapolis in Fountain City, there is a simple red house that sits in the middle of town.  It’s an eight room, Federal-style brick home that initially appears similar to any other house built in the area during the 19th century.

Inside, however, visitors today will discover the secrets and stories of the many freedom seekers who stayed at the home during their journey on the Underground Railroad. 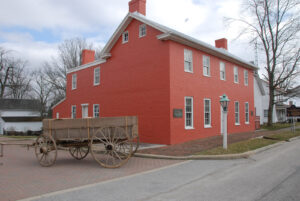 The Levi and Catharine Coffin State Historic Site is one of 11 historic sites associated with the Indiana State Museum and Historic Sites, along with the Indianapolis-based museum. It’s also a National Historic Landmark. It’s inside this house that the story of the “President of the Underground Railroad” – Levi Coffin – is told.

Coffin and his wife Catharine were Quakers who lived in Newport – now Fountain City – from 1826 to 1847.  Levi grew up in North Carolina, where he witnessed firsthand the cruelty of slavery.  Together with his wife, they worked tirelessly to provide transportation, shelter, food and clothing for the hundreds of freedom seekers who traveled through Newport.

Freedom seekers often used three main routes on their path to freedom, which took them through Madison, Jeffersonville or Cincinnati.  From these three places, they traveled to Newport, where the Coffins were able to assist them along the way. 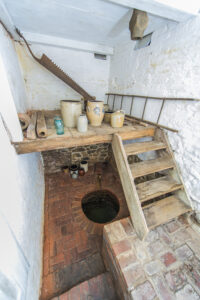 Unique features still found inside the home helped the Coffins conceal so many visitors at once. One example is the spring-fed well in the basement kitchen that provided easy access to water.

Even its location served an important purpose.  Located in the center of the abolitionist Quaker community, residents were able to serve as lookouts and warn the Coffins when bounty hunters came to town.

During their time in Newport, Levi and Catharine helped around 2,000 freedom seekers on their journeys to freedom. A thousand freedom seekers passed through the home located at the site – known as “Grand Central Station of the Underground Railroad” due to how busy it was.

In “Reminiscences of Levi Coffin,” he said, “Although the number of fugitives that I aided on their way was so large, not one, so far as I ever knew, was captured and taken back to slavery.” 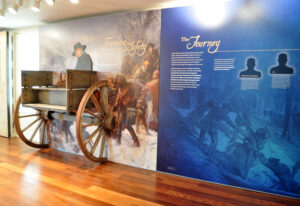 Today, visitors to the site will learn their stories, starting with a tour in the Interpretive Center, which opened in December 2016 and was named by Smithsonian Magazine as one of the 12 New Museums to Visit in 2016.

The exhibits tell stories of both the Coffins and freedom seekers, like William Bush, a runaway slave who chose to live in Newport.  Guests may even meet his great-great-granddaughter Eileen Baker-Wall on their visit – she volunteers at the site and enjoys sharing the story of her ancestor.

After exploring the exhibits, visitors can embark on a guided tour of the Coffin home, which contains original furniture from the Newport community and some from the Coffin family.  The tour highlights the many features that helped hide and protect so many freedom seekers.  Visitors may even find themselves touring the home with one of the “Coffin sisters,” Janice McGuire and Saundra Jackson, longtime volunteers who have dedicated most of their lives to telling the Coffins’ story.

The Levi and Catharine Coffin State Historic Site is currently open from 10 a.m. to 5 p.m. Tuesday through Saturday, and from 1 to 5 p.m. on Sunday.