The Sounds A Mural Makes

Touch the mural in the Indiana State Museum’s new Gallery One and you’ll hear birds chirping. Or the wind rustling. Or maracas rattling. Or one of five other sounds. And if you look closely at the design, you realize that you’re watching a seed sprout into a flower.

This interactive installation, called “Seed Swap,” which invites visitors to engage in the elements of dance, movement, play, sound and imagination, is the creation of Indianapolis artistic duo Shamira Wilson and designer Danicia Monét. The pair used their love for gardening and plants to present “a reflection of flora dancing, highlighting how plants play, and inviting we, the people, to play through the planting and sharing of seeds, bearers of life, among the earth and among friends.” 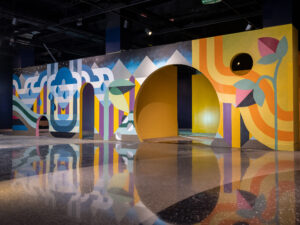 The 40-foot-long by 10-foot-high installation flows through four “zones” – the hill where the seed is planted, the seed being watered by the rain, the seed beginning to sprout and the flower sprouting into sunshine and sky. Each zone is inspired by an aspect of geology and geography.

In addition to their “orchestra of sounds,” the installation also features three distinct passageways to crawl or walk through, each offering a different perspective of the new gallery. Wilson and Monét designed the bold-colored walls behind the passageways too, helping create what Indiana State Museum Chief Officer of Engagement Brian Mancuso called “an exciting place to go inside, which is exactly what we wanted.”

There are floor decals of seeds, sweet potato flowers and okra for visitors to playfully step on and engage with, and a musing – a poem that was influential in the creation of the design that will appear on the installation – for guests to recite while they’re playing.

“They came up with a great design,” Mancuso said. “It’s so visually impactful. It’s something where you say, ‘I want to experience that every day. It’s an image you don’t get tired of.”

Mancuso first encountered Wilson’s work when he saw the mural she painted at the Indianapolis Artsgarden in 2020 that has butterflies as its centerpiece. (She also has installations in the Fountain Square neighborhood and at Ash & Elm Cider Co. on East Washington Street.) He asked her to design something similar for Gallery One, the museum’s newest space opening on Saturday, June 25, which offers visitors opportunities to interact with objects in provocative and playful ways.

“We approached her specifically for her style – the chunky bold lines and flowing forms,” Mancuso said.

He told her he wanted “perspective playhouse.”

“So we went with ‘playhouse,’” Wilson said.

“We knew aesthetically what we wanted,” Wilson said. “The narrative happened organically,” blossoming from their combined work with human-environment relationships. Wilson is an interdisciplinary artist and researcher investigating ethnobotany, herbalism and geology. Monét specializes in interactive design, connectivity and healing arts. 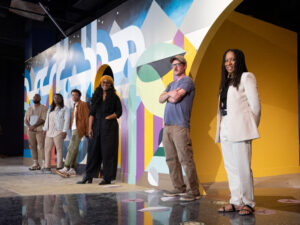