In planning the new Snowfall Express train ride, the staff of the Indiana State Museum and Historic Sites started with a specific goal: create a memorable experience that the entire family could share.

“We asked ourselves how we can make an attraction that’s accessible for everyone and keeps families together,” said Brian Mancuso, chief officer of engagement. “Everything built up around that.” 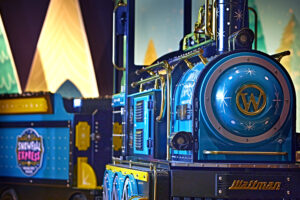 When visitors ride the Snowfall Express, the four-minute, 13,000-square-foot ride that opens November 26 on the third floor of the museum, they’ll be taking a trip that took two years to develop, design and build. Here’s how it unfolded:

The first question to tackle was what kind of attraction to create. Museum leadership looked at several options – including indoor and outdoor skating rinks – before deciding on a train. And since the museum had a history of running the historic L.S. Ayres train during the holidays, the idea of a new train experience that carried on the tradition seemed like a natural choice.

Museum leadership brought together representatives from different departments and hired a consultant to lead an intense period of designing and planning activity. Rather than a kiddie ride that goes round-and-round, they decided on what’s known as a “narrative dark ride,” where passengers are in a vehicle that travels through specially lit scenes containing animation, sound, music and special effects. 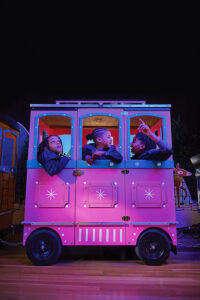 Mancuso said they looked at different concepts before choosing “a magical realism journey” with animals, set in wintertime and featuring the first snowfall of the year. They drew some potential art and created a rough idea of what the train would look like and where it would travel in the museum.

Initially, they thought about a train on a track that would travel between the two smaller galleries on the third floor.

But tracks come with their own set of installation problems, and the smaller galleries were too small for what the team had in mind.

“We decided we needed the whole third floor to have space for the train to turn and go places, slaloming through the scenery,” Mancuso said. “We have scenery on both sides. It feels active. The train is only going 2 mph, but you feel like you’re really moving. You’re constantly looking out both sides of the train, taking in the scenery and animals. We feel like we’ve really created the experience we set out to create.”

Once the concept was decided, Vice President of Experience Adam DeKemper, Lead Interactive Fabricator John Segner and Lead Scenic Fabricator Brian Johnson laid out what the scenery would look like and how it would flow.

Senior Exhibition Graphic Designer Leigh Anne Weddle put together what are known as “look boards” to create a visual story, and then the museum called on Indianapolis artist Candice Hartsough to design the animals and backgrounds that visitors will see in the Snowfall Express. (Read more about Hartsough’s work here.)

The team decided they wanted some movement in the scenes – raccoons throwing clothes, leaves spinning, sloths buckling under the weight of sports equipment. He turned to Segner and Johnson for that, and they came up with mechanisms to have these two-dimensional creatures carry out three-dimensional actions.

“It’s pretty amazing how we’ve used all of our talents – and pushed some of them – to create the Snowfall Express,” Mancuso said.

The next big step was finding someone who could create music to enhance the ride. During the COVID-19 quarantine, Mancuso researched elements of what makes a ride good. He found people talking about ride history for Disney. He watched video of a Japanese Winnie-the-Pooh ride. “You may not understand it, but you get a sense of the story with the music and imagery,” Mancuso said.

He knew that one of the keys to making the Snowfall Express experience complete was finding the right composer to add music and audio effects. “You can’t just turn on “Rockin’ Around the Christmas Tree,” he said. “The music needs to drive the story.”

Van Cleave captured “the excitement of the first snowfall in his arrangement,” Mancuso said. “The music is hopeful and buoyant, the animals are excited and when the first snowfall hits, it’s sweeping and tinkling and crystalline. It feels like the movement of a waltz that’s always propelling you forward.”

With all the pieces in place, the last step was to install the ride. A team of 11 people have been working since September to make sure visitors have the ultimate experience.

Celebration Crossing was made possible with the generous support of Nicholas H. Noyes, Jr. Memorial Foundation and the Ayres Foundation, and is sponsored by GEICO Philanthropic Foundation